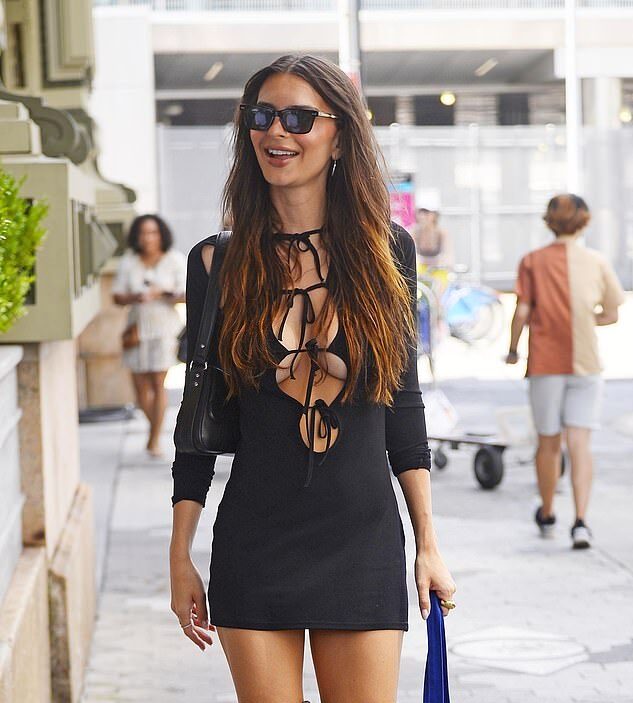 Newly single Emily Ratjkowski looked ready to mingle as she stepped out for a lunch date in New York City on Thursday.
Post Views: 97

Newly single Emily Ratjkowski looked ready to mingle as she stepped out for a lunch date in New York City on Thursday.

The model, actress and entrepreneur highlighted her ample cleavage by slipping into a plunging black LBD that laced-up the front.

The V-neck design of her dress fell to her toned tummy and the hem rested mid-thigh.

The Inamorata founder, 31, strutted down the bustling streets of Manhattan with confidence in a pair of brown suede knee-high cowboy boots.

She turned more than a few heads in her sexy ensemble as she neared the restaurant.

She styled her dark brown tresses long with an added touch of volume and a part in the middle.

With the sun glaring down and the temperature getting close to 90 degrees Fahrenheit, the London, England native sported stylish sunglasses.

She had a lovely purse over her right shoulder.

Ratajkowski also appeared to be prepared to make some kind of purchase by brining along a blue reusable bag with her.

It’s only been just over a month since the Feel Pretty star decided to split from her husband Sebastian Bear-McClard after about four years of marriage.

The decision came about 16 months after the former couple welcomed their son Sylvester to the world.

The film producer has reportedly been desperately trying to win her back, but Ratajkowski wants no part in any kind of reconciliation, according to a Page Six source.

Ratajkowski is reportedly moving forward with divorce proceedings amid claims that her estranged husband was unfaithful.

Although neither of them have commented on the reason for the split, Emily has liked a series of tweets about her single status, which includes a ‘like’ on a post that read: ‘Can’t believe that little b**** cheated on emrata.’

The estranged couple have since sold their Los Angeles home, in Echo Park, in June for $2,458,000, nearly four years after purchasing it for $2 million, according to Newsweek.

“I’ve Been All Over The World, But Nowhere Has Captured My Heart Like The Balkans”
Ukrainian Journalists Urge Media to Counter Russian Propaganda