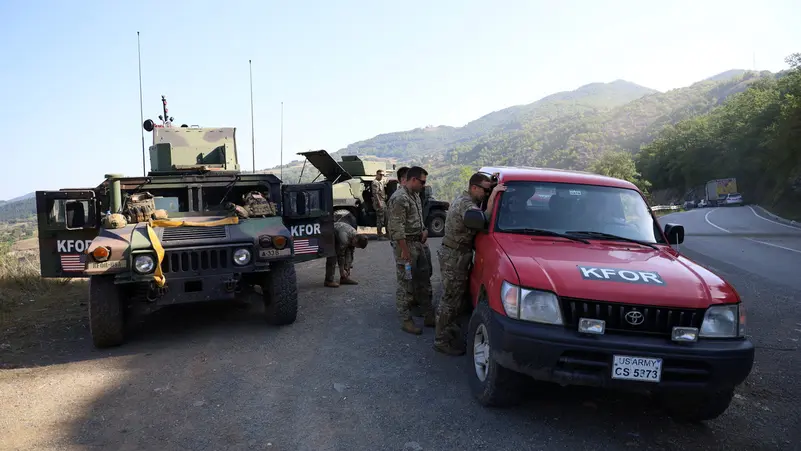 American NATO troops were deployed at main roads in the northern part of Kosovo Friday as tensions increased following the collapse of political talks between Serbian and Kosovo leaders in Brussels.

Serbian President Aleksandar Vucic and Kosovan Prime Minister Albin Kurti on Thursday failed to reach an agreement on longstanding border and mutual recognition issues that have spiked tensions in the Balkans and added to Europe’s instability during the war in Ukraine.

Josep Borrell, the EU’s high representative for foreign affairs, announced after the meeting, “today, there is no agreement.”

He said Kurti and Vucic did consent to more discussions in the coming days to hasten the process of normalizing ties between their countries, which were at war in 1998-99.

American patrols were stationed along the main road leading from Serbia into Kosovo, towards the divided town of Mitrovica.

Many locals fear that failure of these political talks that were aimed to resolve 20 years of deadlock between Serbia and Kosovo, could potentially lead into some form of local conflict between Kosovans, Serbs and Albanians.

Kosovo is a former province of Serbia, which has refused to recognize the country’s 2008 declaration of independence.

A NATO-led intervention in 1999 ended a war between Serbian forces and separatists in Kosovo and stopped Belgrade’s bloody crackdown against majority Kosovo Albanians.

The EU has overseen years of talks to normalize their ties, saying that’s one of the main preconditions for Kosovo and Serbia’s eventual membership into the 27-nation bloc.

Tensions between Serbia and Kosovo soared late last month when Kurti’s government declared that Serbian identity documents and vehicle license plates would no longer be valid in Kosovo’s territory.

Serbia has been implementing the same measures for Kosovo citizens crossing into Serbia for the past 10 years, saying if it recognized the Kosovo registration plates and documents it would mean it recognizes Kosovo as an independent country.

Minority Serbs, who live mostly in northern Kosovo, reacted with anger to the proposed change, putting up roadblocks, sounding air raid sirens and firing guns into the air and in the direction of Kosovo police officers.

No one was injured.

Under apparent pressure from the West, Kurti postponed the implementation of the measure for a month, to September 1, when more trouble is expected if a compromise is not reached by then.

In a video clip posted on Instagram, Vucic said he will address his nation on Friday.

Along with Serbia, its allies Russia and China don’t recognize Kosovo’s independence, which is supported by the United States and most other Western states.

There are fears in the West that Russia could encourage Serbia into an armed intervention in northern Kosovo that would further destabilize the Balkans and shift at least some attention from Russia’s war in Ukraine.