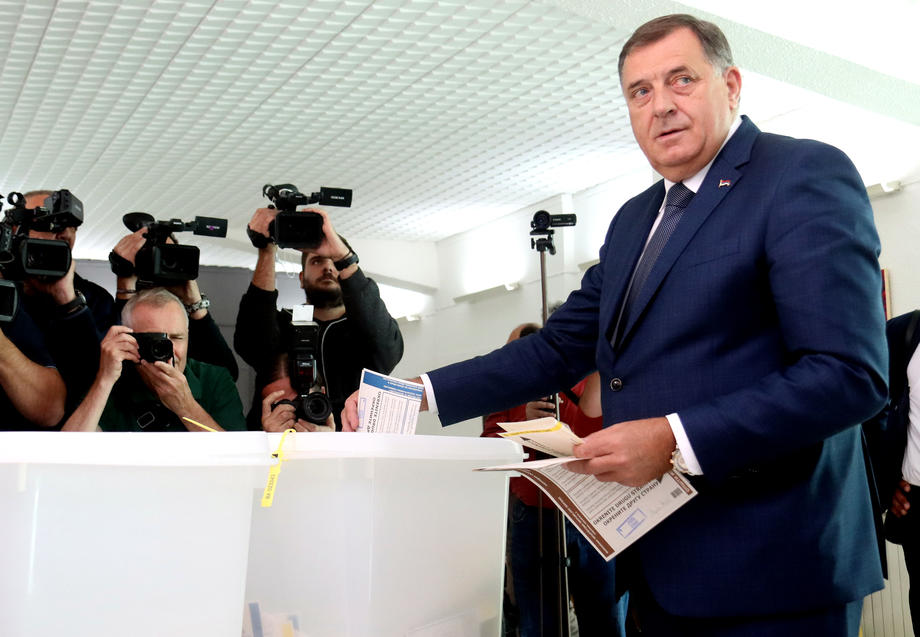 After the elections in Bosnia on October 2, tensions in the country peaked as protests erupted in Republika Srpska over alleged electoral fraud, while an intervention by High Representative Christian Schmidt, to impose changes to the country’s election law also caused reactions online.

In other online incidents worth noting in recent weeks, there were incidences of cyber violence against women in Romania and Serbia, continued hate speech targeting vulnerable groups, and in particular the LGBT community, while misinformation continued to be rampant in Hungary.

Political rivalry and ethnic tensions marked the Bosnian pre-election period, and several online attacks were registered. After polls closed there has been a climate of uncertainty about who the real winners were, tensions have skyrocketed in the country and protesters have been contesting the results.

Thousands of people rallied in Banja Luka, the administrative capital and the largest city of Republika Srpska, accusing Bosnian Serb political strongman Milorad Dodik and his party of election fraud and demanding a ballot recount. Not long after, Bosnia’s Central Electoral Commission ordered a recount of almost 645,000 ballots across all polling stations in the entity and the Brcko District, citing irregularities during the election process, sparking an angry reaction from Dodik.

The post-election intervention by High Representative Christian Schmidt, the country’s top international official, did not calm the mood in the country. While the counting of the votes was still in progress, Schmidt announced changes to some provisions of the constitutional law of the Federation of Bosnia and Herzegovina and to the country’s general electoral law, causing divided reactions.

In the first incident of the election campaign, Faruk Kapidzic, candidate of the Bosniak Party of Democratic Action, SDA, posted a series of insults about the editor of Face TV, Senad Hadzifejzovic, on Facebook. Kapidzic’s post were triggered by a satirical segment of a Face TV programme that used a photo of Foreign Minister Bisera Turkovic, who is also an SDA member, in an insulting context. Kapidzic’s post was widely shared and liked, triggering hate speech posts and more insults targeting editor Hadzifejzovic.

On September 18,  there was another incident in which a video of a speech from an SDA pre-election meeting, which contained hate speech, was circulated on social media. In the video, SDA candidate Sebija Izetbegovic called the party’s opponents “losers with bloodshot eyes”, while candidate Amor Masovic said that “mass graves and detention camps” await voters if they cast their ballots for the SDA’s rivals. Their comments were widely condemned for reawakening fears from the 1990s wars.

On September 26, another video started circulating on social media showing Kenan Uzunovic, the head of the BHI KF (Bosnian and Herzegovina Initiative-Kasumovic Fuad) political party, who was running for the Federation entity parliament, insulting his opponents. Uzunovic claimed that the video was a montage published via fake Facebook profiles and financed by his rivals, the Party of Democratic Action the People’s European Union, aimed at undermining his electoral support.

Women targeted in Romania and Serbia

Many online environments continue to be hostile places for vulnerable groups, including women who are systematically targeted by hate speech and harassment. Gender-based online violence is still on the rise in the Balkans and, in most cases, it goes unpunished for reasons including fear of retaliation and delays by law enforcement authorities.

In Romania on September 22, supporters of Visarion Alexa, a Bucharest priest who used to be a fixture on popular podcasts and YouTube shows, harassed women on Facebook and other online media after they accused him of sexual abuse.

Many Romanian social media users made comments supporting the attacker, with some journalists openly showing their support through Facebook posts or even on TV, with headlines calling the accusations against the priest unfounded.

However, following the opening of an investigation, the priest was subsequently arrested for sexual assault and admitted all charges. Sources close to the investigation said one incident happened while the victim was confessing. The Romanian Orthodox Church also opened an internal investigation with the aim of removing Alexa from the priesthood.

A further incident was recorded in Serbia, where activists from Female Solidarity, a feminist organisation, received a series of threats on social media.

The threats started after they organised protests in front of the Belgrade offices of Informer, a pro-government tabloid which published an interview with a convicted serial rapist who had just been released from prison.

“Threats have become more frequent, we have been receiving them on social networks every day since we called for protests,” said Jelena Riznic, a member of the Female Solidarity collective, claiming that they were also being threatened “directly in messages”.

Online hate speech and discrimination targeting vulnerable groups, including women, minority groups, LGBT people, Roma and other communities remain some of the most frequently occurring digital violations across the region.

After Serbian tabloid Informer published its interview with the convicted serial rapist on September 28, which it also uploaded to its YouTube channel, Dragan Vucicevic, the tabloid’s owner, claimed that the rapist was arrested because he reported him to the police for harassing the female journalists who interviewed him.

Meanwhile, during the EuroPride LGBT rights event in Belgrade, Twitter users in Bosnia reported that a user account under the name Mile Martic was spreading hate speech. “An idea for a future Pride is to gather people and do something like the Markala market,” said one post on the Mile Martic account. During the Bosnian war, two massacres took place at the Markala market in Sarajevo.

On September 27, a Twitter user in North Macedonia also wrote insults about the LGBT community, calling Julian Assange and Edward Snowden “real fighters for human rights and freedoms – not those fags over there at Pride parades”. Similarly, in a post titled “Better a Dictator Then a Gay”, a Twitter user said “fags from Macedonia need to be liquidated as a matter of urgency”.

A separate incident saw another Twitter user from North Macedonia writing that if Russian President Vladimir loses the war in Ukraine, “fags and paedophiles will rule the world” and “it will be possible to change gender covered by the Health Insurance Fund”.

Falsehoods and misinformation in Hungary

On September 13, Hungarian pro-government pundits Dániel Bohár and Zsolt Bayer and State Secretary Bence Rétvári posted claims that in Switzerland, people can be jailed for heating their homes above 19 degrees Celsius. However, in Switzerland, there are no legal restrictions on the temperature to which people can heat their homes.

A photo was also circulated by Hungarians on Facebook of a billboard asking people to report their neighbours if they heat their homes above 19 degrees. The photo has been debunked as a fake.

On September 29, far-right website Vadhajtások and pro-government pundit Dániel Deák shared a video claiming that it was taken before the Italian elections and that it showed demonstrators protesting against the European Commission led by Ursula von der Leyen. However, the video was not shot in the autumn of 2022, but in December 2013.