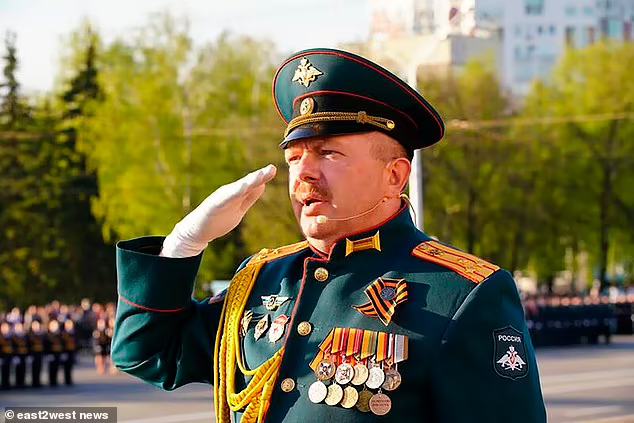 Russia has admitted losing two officers in a single day, including one who had been sent to replace a colonel who died fighting earlier in the war.
Post Views: 289

London (21//05 – 45.00) Russia has admitted losing two officers in a single day, including one who had been sent to replace a colonel who died fighting earlier in the war.

Lieutenant-Colonel Denis Sukhanov, 41, was reported to have died ‘defending civilians’ though the exact location and date of his death were not revealed.

Meanwhile Colonel Denis Kozlov, 40, was revealed to have died during a botched mission to cross the Donets River last week that ended with an entire Russian battalion being wiped out.

Kozlov was the second commander of the 12th Separate Guards Engineers to die in the conflict, after being sent to Ukraine to replace Colonel Sergei Porokhnya, 45, who was killed on March 14.

Kozlov, who was guiding a pontoon ferry across the river at the time, was killed after Ukrainian forces launched missile strikes on the area.

Satellite images laid bare the scale of Russia’s failure with the remains of two pontoon bridges seen drifting in the Donets river, surrounded by the ruins of destroyed tanks and armoured vehicles.

It appears Russian commanders were attempting to surround Lysychansk – and its sister city of Severodonetsk – with the crossing, but saw their sneak-attack turn into a massacre when Ukraine correctly guessed their plans.

‘Maxim’, a Twitter user claiming to be a Ukrainian military engineer, says he identified the spot where Russia was most-likely to try crossing the river on May 7 and told his commanders to listen out for the sound of tugboat engines pushing a pontoon bridge into place as a sure sign that a crossing was imminent.

On the morning of May 8 Russia blanketed the river with smoke by burning nearby fields and throwing smoke grenades, he said, but commanders detected the sound of boat engines and called in artillery strikes which caused devastating losses.

Kozlov was posthumously decorated with the Russian Order of Courage, and laid to rest in his hometown Murom.

His death – the 42nd known colonel to perish in the war – highlights the huge toll suffered by Putin’s top brass.

Nine Russian generals are also known to have died with reports that the US has assisted Ukraine with intelligence to allow them to target Putin’s top brass.

The death rate is around one colonel every two days.

In March, Lieutenant Colonel Alexander Blinov, 42, was killed but news of his death was strenuously denied by Russian officials.

His death was confirmed in May by a picture on his grave in Volgograd, south-western Russia.

Blinov was a married father of three. A family friend said: ‘For us it is just a shock.’ He served in a motorised rifle unit.

The Lieutenant Colonel was a high-flying elite soldier reportedly killed on a secret intelligence mission.

The father-of-three was portrayed as a hero who was killed near Kharkiv ‘with a machine gun in his hands covering his subordinates’, according to reports in Russia.

The actual toll of dead Russian high ranking officers be higher since the defence ministry has acknowledged few deaths.

Bichikaev was one of Russia’s youngest colonels, second in command of his regiment, and his death amounted to ‘a heavy, irreparable loss’, said the report.

Bichikaev’s death came a day after the disclosure of the death of Lt-Col Fyodor Solovyov, 44, in the Donbas.

Solovyov was commander of the howitzer self-propelled artillery regiment of the 127th motorised rifle division in Putin’s army.

He was buried with full military honours and a triple volley of guns in Chunaki village, Penza region.

Four days earlier Lt-Col Eduard Dmitriev, 44, a tank commander, was reported to have been killed.