Rise of the Ex-Militant in Lankan and Iraqi Politics 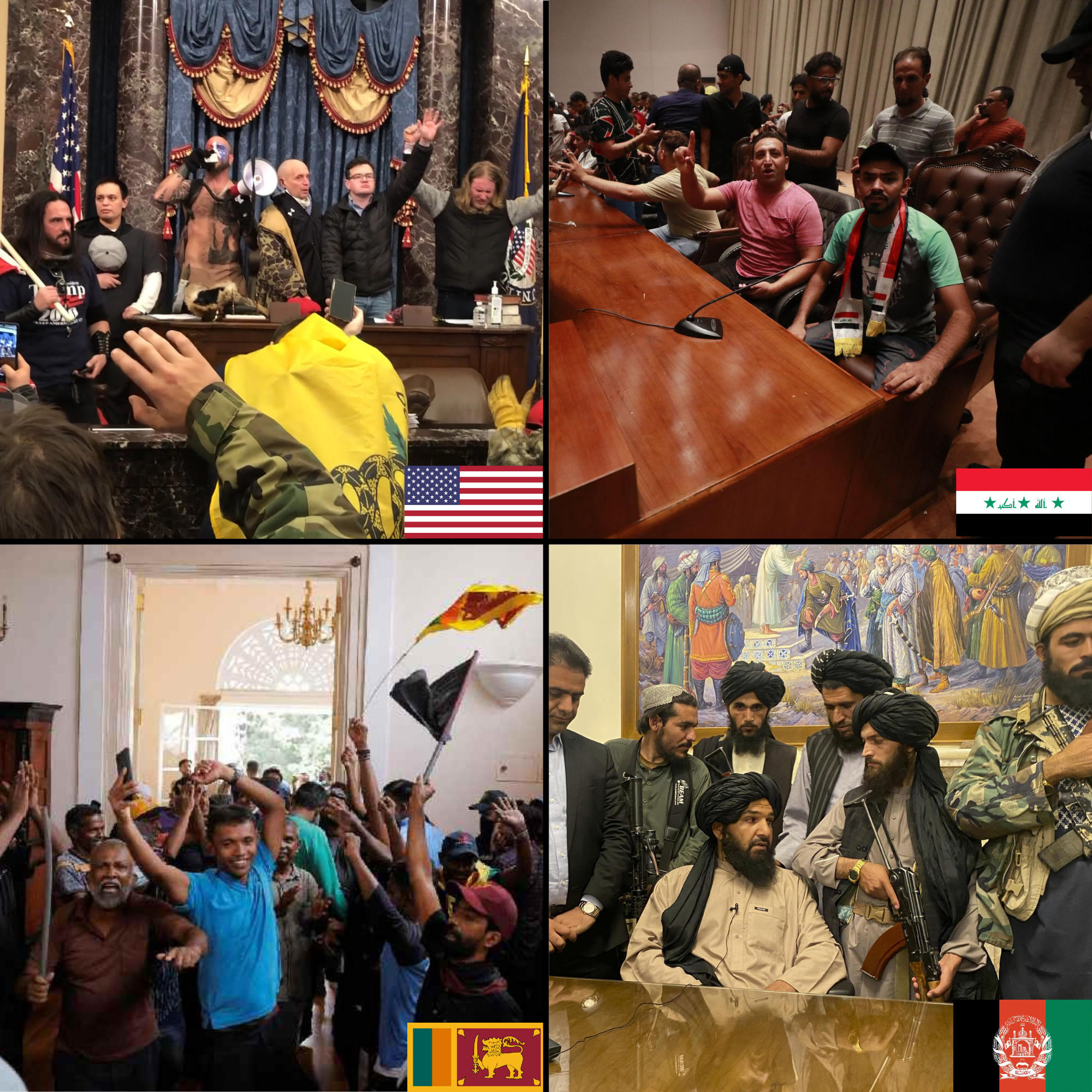 Colombo (03/08 – 22.22) The global political machine grapples with instability. The raging protest-riots in Sri Lanka, the government collapse in Pakistan, the resignation of UK’s Boris Johnson, the resignation of Italy’s Mario Draghi, the assassination of Japan’s Shinzo Abe and the plummeting public approval for America’s Joe Biden are just some of the bad cards on the international table of politics. At present, a new rise of political instability unfolds in Iraq, where protesters backed by ex-militant leaders have stormed the nation’s parliament twice within the last seven days — perhaps repugnant precedence from the Sri Lankan neo-insurrection.

Iraq’s politics and national security soundness had been crushed by the US invasion of Iraq in 2003 and since the fall of Saddam Hussein. With the emergence of the Islamic State, al-Qaeda-backed factions and regional insurgent groups as well as the raging civil war that followed, the level of instability in the former strongman state has been immense for decades. However, with a perceptible shift in US foreign policy away from the Middle East, the Biden administration ended combat operations in Iraq last year.

The 2021 Iraqi parliamentary election resulted in the Sadrist Movement winning the highest number by a political party however failing to secure the majority in parliament. The Sadrist Movement is headed by Muqtada al-Sadr, a former militia leader who was active during and after the US Invasion of Iraq almost 20 years ago. While he has reportedly committed multiple acts of violence, al-Sadr is also accused of assassinating Abdul-Majid al-Khoei, a famous Iraqi cleric and grandson of a former Iraqi leader.

Whilst war ravaged Iraq, al-Sadr established a militant force — Jaysh al-Mahdi, also known as Mahdi Army. Similar to the Sri Lankan JVP during the 20th-century insurrections, the Mahdi Army was involved in launching multiple attacks against political targets and state infrastructure. The Mahdi Army also opposed the US occupancy force and its allies.

Al-Sadr, using his Mahdi Army, frequently armed and supported resistance groups who fought against the US invading forces, especially during the Battle of Fallujah in 2004. In a spin of politico-religious fusion, al-Sadr proclaimed that he will use Jihad against the US-led coalition army after which he launched attacks on vehicles at the Baghdad International Airport and exploded bridges and overspans. Like the insurrectionist JVP politburo of the 80s, al-Sadr was involved in violence against the state and civilian population and operated multiple death squads to exterminate resistance.

In another similar trait of the JVP and its breakaway factions, Muqtada al-Sadr shifted his focus from gun to ballot and strengthened the Sadrist Movement in Iraq. In the mid-2010s, al-Sadr and the Sadrist Movement were involved in a series of protest-riot compilations launched across Iraq, including when al-Sadr led a one-million strong support base to protest against the government. In 2018, the Sadrist Movement was able to win 54 seats in parliament and followed by 73 seats in 2021.

Although al-Sadr controlled the largest political bloc in parliament after the election last year, he failed to establish a majority in power. Following this, multiple clashes inside parliament were staged, promoting instability among the lawmakers. In addition to internal clashes, there was an attempted assassination of incumbent Prime Minister Mustafa Al-Kadhimi as well. The level of political chaos resulted in the Iraqi parliament being suspended until Supreme Court intervention.

Eager to claim the reigns of power, al-Sadr claimed, after the election was concluded, that he will form a majority government. Failing to achieve this claim despite the chaos he created, the entire Sadrist Movement resigned from parliament in June 2022.

On 27 July, al-Sadr’s supporters, carrying portraits of their leader, breached the walls of Baghdad’s Green Zone and invaded the parliament. Similar to its South Asian counterpart, the protesters were met with tear gas but were eventually allowed to pass through hassle-free. The al-Sadr protesters are opposed to the nomination of former minister Mohammed Shia al-Sudani, who is the presidential candidate of the Iran-backed Coordination Framework.

Like the Aragalaya movement in Sri Lanka, al-Sadr’s protesters stormed government buildings in the political Green Zone and occupied them for a period of time until political authorities and the protest leaders signalled them to withdraw. Similar to the worriless — or perhaps careless — smiles of the trespassing protesters in Sri Lanka, al-Sadr’s protesters appeared to enjoy their stay at the parliament and government buildings.

The above narration of the historical and contemporary Iraqi politico-militant dimension is not merely a political composition, but rather a pertinent comparison to how former militant groups attempt to snatch power and spread influence through undemocratic means. In the Sri Lankan state of affairs, the hidden hands behind the Aragalaya begin to come to light — including the involvement of the JVP, its fronts and breakaway groups.

The leadership of the JVP’s Inter-University Student Federation in the coordinating and mobilising of vigorous student groups breathed life and blood into the Aragalaya. Likewise, Kumar Gunaratnam’s Peratugami breakaway of the JVP managed to invade three key government buildings without the use of militant practices employed by Wijeweera. Kumar Gunaratnam alias Kumar Mahathaya alias Gemunu fought a guerrilla war against the Indian Peace Keepers and the state in Trincomalee in the 1980s and now transpires in a pioneering role in the success of the Aragalaya. This sheds light on a similarity emerging between the Sri Lankan and Iraqi invasive protests — former militant groups engaging in protest movements in support of political metamorphosis or regime change.

Gunaratnam’s ‘Jana Aragala Vyaparaya’, the predecessor of the Frontline Socialist Party, was established in 2012, more than a decade before a movement of the same name achieved regime change in Sri Lanka. The Frontline Socialist Party, like al-Sadr’s Sadrist Movement, was involved in multiple protests and demonstrations throughout the years leading up to the political crisis in 2022, including a protest in support of Black Lives Matter and George Floyd.

The transformations of al-Sadr from his sadist movement to the Sadrist Movement and Gunaratnam from the guerrilla frontlines to the Frontline Socialist Party are incredible revelations of how former militants attempt to mould the political status quo through public movements to satisfy their ideological and partisan goals.

Of course, this is not to say that a former militant group is not fit for office, but a mere observation of a potential transformation in global political strategy of former militants attempting to grab power using undemocratic means through the democratic right to protest — like wolves under sheep skin.

The invasion of top government buildings in an attempt to secure power appears to become the political norm following the January 06 US Capitol Attack, the July 09 Sri Lankan Aragalaya Riot, the Taliban takeover in Afghanistan and the July 27 Iraqi Parliament Invasion. While being one for the history books, these events indeed shape the contemporary global political ecosystem. And the world is not prepared.