Home » Enemy within the Kremlin Gates. FSO gets ready to protect Putin from coup by using priests, hypnotists and political officers 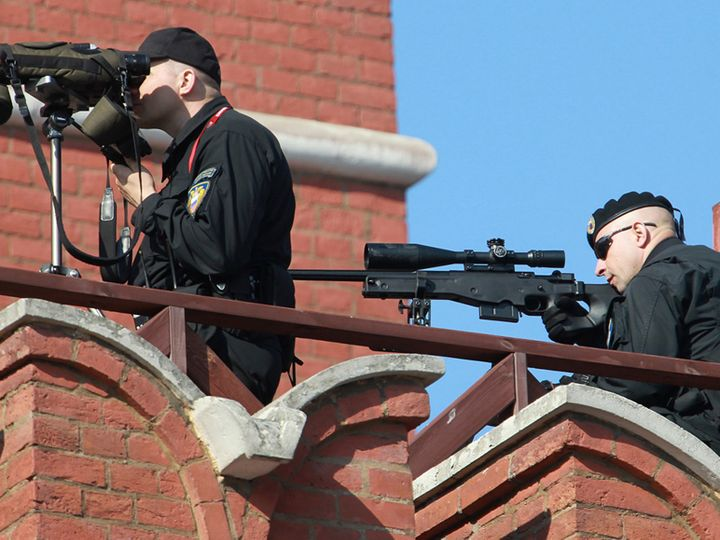 On October 26, armed men with military equipment appeared in central Moscow. Some Muscovites had hopes that a military coup was taking place, but the FSO hastily announced “scheduled tactical exercises to neutralize terrorist threats and protect key government facilities.” The Insider has found out that tactical exercises are only a small part of the special measures to be implemented by the FSO under martial law. The FSO is preparing its personnel for “a massive ideological attack” in which the enemy will use the media, social networks, religious organizations, hypnosis, psycho-generators. and even “everyday household items in prepared packing”. By way of retaliation the FSO generals plan to use counterpropaganda, weekly political training sessions, collective church attendance and the identification of FSO officers with unstable psyche and inadequate reaction. General Aleksandr Komov, deputy director of the FSO, is directly responsible for implementing the plan. According to a source in the Kremlin security services, General Komov is not only extremely vigilant, but he also listens carefully to the advice of astrologers and psychics.

A draft of the classified “Plan of moral-psychological support of peacetime transition of the FSO Directorate of Operations <hereinafter, the FSO Directorate – The Insider>“ is at the Insider’s disposal. The Directorate is one of the key elements in the structure of the Kremlin’s security service; it is not only responsible for the security of the top government officials, but also performs counterintelligence functions within the FSO. The plan is divided into four parts:

(1) “Measures to be implemented in direct preparation for the transition to martial law.”

(2) “Measures to be implemented upon the introduction of the “Elevated” level of combat readiness.”

(3) “Measures to be implemented taken upon the introduction of the “Military Threat” level of combat readiness.”

(4) “Measures to be implemented taken upon the introduction of the “Full” level of combat readiness.”

In the “Elevated Combat Readiness” part, it is recommended to hold interviews with individual security officers, to inform the FSO personnel about the domestic, international, and political-military situation. In addition, visits to the FSO Hall of Fame and History in the Kremlin and an excursion to the Cathedral of the Icon of Our Lady of Kazan are envisaged.

The “Military Threat” section proposes “promptly informing and explaining the tasks facing the unit and conducting social-government training sessions (at least 1 hour per week)”. In case of military threat, evacuation of family members of officers of the Kremlin guards from Moscow cannot be ruled out. Unit commanders and psychologists from the Personnel Department of the FSO are charged with boosting the morale of their subordinates.

With the introduction of “full combat readiness” it is necessary to “explain to the personnel the requirements of the Russian law concerning liability for military crimes, prevention of confusion and panic among military personnel and their families”. In addition, it is necessary to give examples of heroism and courage of the FSO officers.

The planners warn in advance that in the event of a coup, some of the officers defending the Kremlin may experience depression, melancholia, uncertainty about the correctness of their superiors’ actions, feelings of fear and anxiety for their lives. Among the responses proposed are “counter-suggestion”, “counter-conviction”, “initiative interception”, “object substitution”, and confidence-building interviews with young officers who are prone to neuropsychological instability. The most politically savvy FSO officers should be assigned to the least resilient ones. Or, alternatively, such psychologically vulnerable officers should be sent to the hospital.

The FSO planners emphasize that the enemy is cunning and insidious and will first of all seek to “reduce the psychological stability of personnel, disorient them morally and make them unprepared for resistance. Among the key threats they name television, radio, print media, social media, books, brochures, leaflets and posters. In addition, agents of foreign intelligence may engage social movements, non-governmental and religious (pseudo-religious) organizations, and reach out to relatives of FSO officers. Particular emphasis is placed on certain individuals “capable of psychologically infecting personnel and possessing hypnotic abilities.” However, the document does not specify who these individuals are or how they can hypnotize and psychologically infect the well-trained Kremlin guards.

The psycho-corrective games mentioned in the classified plan are mainly intended for developing attention and overcoming fears in preschool children. Child psychologists use human or animal dolls for this purpose. How it will look in practice with regard to foreign intelligence agents and FSO officers is difficult to imagine.

Tabloids have written a lot about the psycho-generator, or as it is also called, “dark matter generator”, which had allegedly been developed in secret CIA centers. Those publications were used by more than one generation of conspiracy and pseudo-science theorists. The Soviet Union also sought to create psychological weapons, a lot of money had been invested, but due to meager results the secret program was closed.

Low-frequency acoustic generators are unlikely to weaken the morale of personnel, as they are used for troubleshooting and repair of electronic or electro-acoustic devices. Moreover, it is unclear how foreign agents will be able to sneak in and install those devices in the Kremlin.

It also remains a mystery what is meant by “prepared packing”. A wrapping paper with the inscription “drop your weapons and surrender”?

As The Insider found out, FSO Deputy Director Alexander Komov was directly responsible for the implementation of the secret plan, while Reshit Bukharin, a member of the FSO Personnel Department, prepared the final version. Bukharin, a longtime FSO officer, is believed to be a great intellectual within the FSO ranks – he has published several scholarly papers related to the protection of top-ranking government officials. For example, “Personal Bodyguards of the Chairman of the Council of People’s Commissars of the RSFSR (USSR) V.I. Lenin” and “On Certain Problems in the Historiography of the Protection of the Moscow Kremlin from 1918 to 1941”.

General Komov is one of the FSO’s top secret officers, and there is very little public information about him. His colleagues call him Stargazer behind his back, as he regularly participates in all kinds of scientific seminars and discussions on space research. For example, last year he took part in the conference “Modern Problems of Remote Sensing of the Earth from Space”, organized by the Institute of Space Research of the Russian Academy of Sciences. A Kremlin security source told The Insider that General Stargazer leads a group of freelance advisers that includes astrologers, black magicians and psychics. Some of them were advisors to Yeltsin’s personal security chief Alexander Korzhakov and his successor Yevgeny Murov, and now they write forecasts and advise the current FSO chiefs.

In communication with his subordinates General Komov constantly warns of insidious plots devised by western intelligence services and calls for vigilance. Meanwhile, his son Nikita spends his holidays in Europe almost every summer and has already been to the Principality of Monaco, Germany, Italy and France. The last three countries, as we know, are members of the Kremlin-despised NATO.

As regards the FSO Directorate, for which the martial-law transition plan was prepared, the main tasks of the secret service unit include countering foreign secret services within the Kremlin security service, detection of corrupt practices and embezzlement of budget funds, and examining FSO officers’ incomes and real estate. The Directorate officers have the authority to conduct covert surveillance of their fellow officers, wiretap their phones, and participate in preliminary interrogations using a lie detector.

However, most of these devices use foreign-made microchips, and after the imposition of sanctions against Russia it’s unclear how they will be repaired and maintained.

The FSO is headed by General Sergei Kudinov, a former officer of the 3rd Service of the FSB’s Internal Security Directorate. In 2019, he succeeded Nikolay Musinsky, whom Putin met when he worked at the KGB’s Leningrad directorate. According to The Insider’s source in the FSO, with the arrival of Kudinov the security service launched an active campaign to identify unreliable persons, alcoholics and drug addicts: “They were grabbed right in the Kremlin corridors and immediately subjected to blood and urine tests. Then the questioning started on whether or not they supported the policies pursued by President Putin… Or they were requested to denounce the subversive activities of Navalny, Yashin, Novaya Gazeta and Ekho Moskvy. According to the source, several security officers were not vetted and were fired or demoted.

According to The Insider, even tougher requirements for political loyalty apply to the Presidential Security Service (SBP) and the Personal Protection Directorate (ULO). Bodyguards from the SBP have direct contact with Putin, while ULO officers are on duty with sniper rifles on rooftops during his street events.