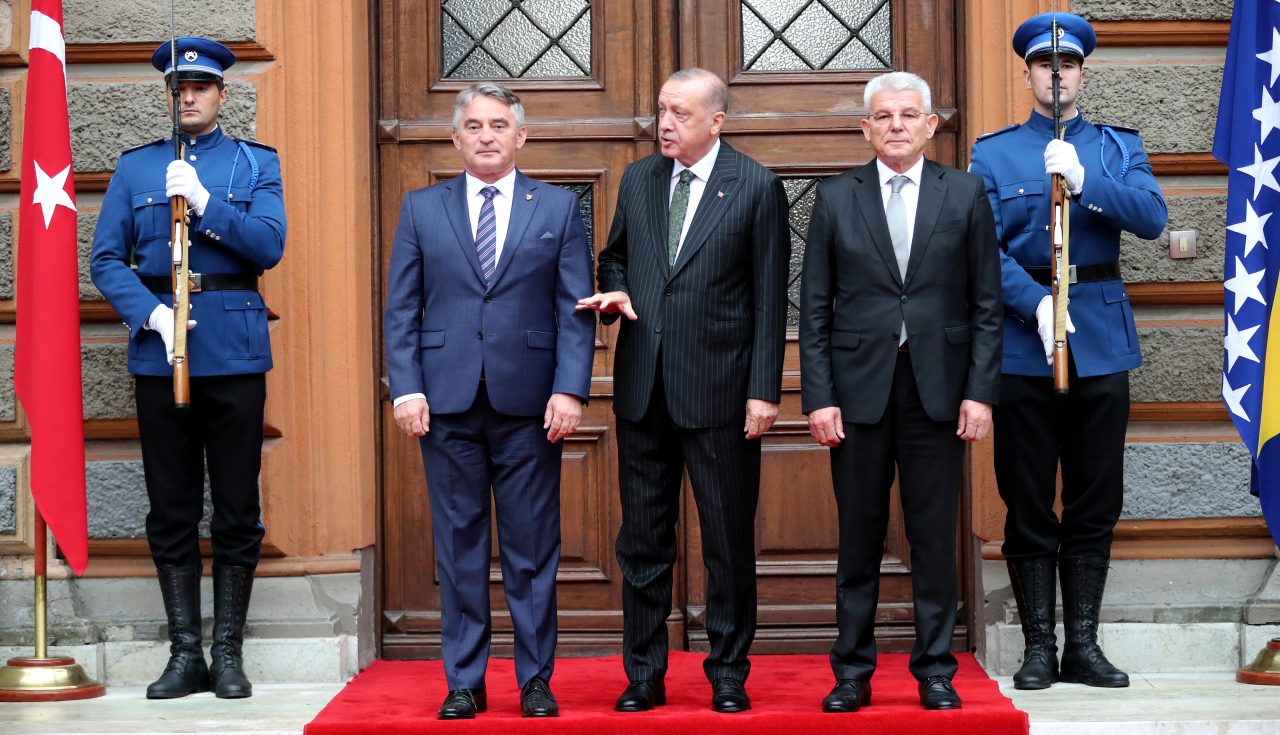 As general elections in Bosnia and Herzegovina draw near on October 2, much of the focus of the politicians seem to be on presenting themselves as capable of mobilizing foreign support.

Leaders of the liberal Nasa Stranka party have visited Kyiv to express solidarity with Ukraine in its struggle against Russian aggression; the main Bosnian Serb party, the Alliance of Independent Social Democrats, SNSD, has been bolstered by funds from Viktor Orban’s Hungary, designed to strengthen the industrial and agricultural production of Bosnia’s Serb-dominated entity, Republika Srpska; the leading Bosnian Croat party, the Croatian Democratic Union, HDZ, is congratulating itself on being able to lobby within EU institutions, thanks to its alliance with the centrist European People’s Party EPP in the European Parliament, and proposes that Bosnia moves its embassy to Jerusalem to thank Israeli diplomats for supporting some of their proposed electoral reforms.

And, in a move understood as supporting Bosnia’s leading Bosniak nationalist party, the Party of Democratic Action, SDA, the Turkish Prime Minister Reyyep Tayib Erdogan recently visited Sarajevo where he accused the West of dividing Muslims, so it can rule them easier. Erdogan also features in the rhetoric of the leading Bosnian Serb opposition party, SDS, which has accused the SNSD of betraying historic Serbian ally Greece by aligning itself with him.

To summarize, for a country seen as lying on Europe’s super-periphery, Bosnia is still able to garner much foreign interest. Such an interest stands in stark contrast to the predictions of analysts and commentators at the end of the first and start of the second decade of the 21st century.

Then, just as geopolitics is a concept seen as explaining pretty much everything fashionable today, the buzzword was corruption. Bosnia, it was argued, was in nobody’s spotlight and was of interest to no great power except the European Union. If only Bosnia could get rid of corruption, it was argued, it could easily move forward, join the EU and become prosperous.

Such a wide understanding of corruption as the source of all evil led to important political issues, such as the constitutional reform or economic policy, being ignored. It also led to an overreliance on the EU and US, and to ignoring the influence of others. Today, a different refrain is heard: if only this or that foreign influence was less or more present, the country would be more secure.

Part of the reason why Bosnian politicians are less focused on what can be done inside the country than on what can be done outside it lies in the proverbial complexity of a political system that produces strong inter-ethnic and intra-ethnic divisions.

Cantonal governance in Bosnia’s Federation entity has become more volatile and fragmented, with many cantons changing governments in recent years. This process of fragmentation has not bypassed the RS either, as a result of changes brought about by intra-party splits. Even HDZ, which views itself as the de facto voice of all Bosnian Croats, no longer governs the Federation’s Canton 10. Large coalitions that often involve not only parties but individuals that consider themselves independent make governance in Bosnia exceedingly difficult.

Unlike the 2015-2018 period, when at least a nominal adherence to a reform agenda was present, in the subsequent period from 2018 to the 2022 elections, no such commitment has existed. Without much success, or much effort, the EU first imposed an ambitious agenda enshrined in the so-called 14 priorities, only to give up on much of the contents and narrow the 14 down to requests for electoral reform.

But the EU itself has become increasingly unable to speak to Bosnia with one voice, and some key member states remain opposed to the US-UK-backed plan for electoral reform. In such conditions, Bosnia’s politicians exploit the fact that the international presence in Bosnia is divided over its future.

A reliance on external influence is not only a characteristic of Bosnian politicians, of course. Even in states known for their self-reliance, like Israel, politicians present themselves as allies of great powers. And while the usage of geopolitics as a concept for explaining everything never really stopped in the Balkans since the 1990s, its popularity around Europe roughly began when Ursula von der Leyen’s Commission began styling itself the geopolitical commission. Since Russia attacked Ukraine, a flood of proposals over what to do with the remaining European states that have not joined the EU came from both governments and experts. Almost all these proposals considered themselves “geopolitical.”

In reality, there is little that is geopolitical about these plans. What they share is the idea that the EU – mostly through quasi-membership offers – should increase its influence in European countries that are not in the EU. And, that is a credible goal, supported by most people in those countries.

But the term geopolitical, or geopolitical approach, does not mean exerting control over a certain territory. It refers to the characteristic of a certain country to influence or be influenced by geography, or to use its geography or politics to project its influence to a certain area. Such a leverage the EU already has in the Balkans and especially in Bosnia, which is still effectively governed by the international community.

Rather, it appears that those who hide behind the geopolitical curtain are uncertain about how exactly this influence should be used, and how the EU should enlarge to the Western Balkans or, at least, limit the influence of others there.

By suggesting that this engagement should be “geopolitical” the proponents believe that it would automatically become stronger or more credible. Such reduction of the concept of geopolitics from an analytical lens to a cheap rhetorical ploy does no favours to those trying to combat the non-European influences that have proliferated in the Western Balkans.

Instead of corrupting geopolitics with improper usage, a better approach would be to recognize the close linkage of corruption and geopolitics. A warning story is the saga of foreign investment in Bosnia’s energy sector. The end of this saga, over the construction of Bloc 7 for the Tuzla-based thermal power plant, the largest in the country, marks some 15 years of failed attempts, mainly by Bosniak politicians, to agree on whose foreign investments in the energy sector they want. Kazakh, German, US and Japanese companies were all at one point involved as the main partners of Bosnia’s state-owned Elektroprivreda BiH, the country’s largest electric power producer – and largest national polluter.

When Chinese investors were finally chosen, the condition for their involvement was that they use parts made by a US manufacturer. When US manufacturer General Electric withdrew from the operation, Elektroprivreda abandoned the deal with the Chinese investors, declaring the non-usage of US-made parts a breach of the agreement. Consequently, Bosnia will continue to operate the outdated and heavy polluting blocs but has also wasted 15 years in a mindless geopolitical and geo-economic exercise that created few friends and will likely end before an arbitration tribunal, potentially leading to high costs for Bosnian taxpayers.

In the meantime, the EU waged a legal battle against the project claiming that it was implemented against EU-imposed state aid laws, before losing a case on the matter before an arbitral body. Instead, it could have offered an alternative investment plan, one that the country – which, together with Kosovo, is the least indebted in the region – could afford.

It is the absence of such actions that leads to sensitive issues such as energy transition or constitutional reform being ignored and allow the spread of a narrative in which important analytical approaches to societies, such as geopolitics and corruption, are overused. As others have said before, a more robust approach, which recognizes that reliance on foreign influence comes from the unreliability on European plans for the region, would mean much more than all geopolitical plans in the world.

For example, as evidenced by BIRN, much of China’s non-transparent investments still remain located in energy sectors. If the prevailing EU policy remains focused on rigid thinking, in which geopolitics is a template for a restrictive EU policy, the demand for such investments will find its way back into Bosnian politics.